This summer, I once again attended the  Sacred Music Intensive at Indiana University. This yearly workshop began in 2014 and I attended it in both 2014 and 2015 while I was living in Indiana. I had planned to attend again in 2020 but it was cancelled for the next two years. This year, the workshop was once again held the first week in June

The Sacred Music Intensive is a collaboration between the choral and organ departments of the Jacobs School of Music. In the choral track, Dr. Walter Huff offered practicums in choral conducting. All participants were encouraged to join the workshop choir as we rehearsed several pieces to sing at the final concert. In the organ track, Drs. Janette Fishell, Chris Young, and Marilyn Kaiser coached students in private lessons as well as offering several classes. Marilyn Kaiser held a service playing class every morning. Janette Fishell offered a class on 20th and 21st century compositions suitable for preludes and postludes throughout the liturgical year. Chris Young took us to the Fritts organ at First Presbyterian Church where he discussed Baroque registration. New this year was instruction on the carillon by instructor Lynnli Wang Hall.

Throughout the week, we had all 14of the Jacob School of Music pipe organs at our disposal. Many of the organs are mechanical action, a real treat. I spent hour after hour in happy practice throughout the week.

The event culminated in the final Friday night concert. Participants accompanied the choir anthems and hymns and played solo organ pieces. Altogether it was a wonderful immersive experience and I plan on returning next year.

Posted on February 22, 2022 by Patricia
Categories: Music | Leave a comment

And so it begins…today’s harvest

Mural in an Albuquerque Snow

In Search of the Perfect Bag

I am in a seemingly never ending search for the perfect bag. At the farmer’s market, the renaissance faire, REI, I gravitate to those vendors or to those sections of the store that sell bags.

But I have since realized that there is no perfect bag. It isn’t that perfect bags don’t exist. Rather, it is that my idea of perfection is a moving target. What is perfect today may not be perfect tomorrow.

What I need in my “perfect” bag has changed over the years.

But then my needs changed. In addition to apartment keys, I now had a car key. My wallet got thicker. In it, I had a driver’s license, a couple of credit cards, a library card, a bank card, a grocery store card. It was no longer that easy to cram the thicker wallet into my tiny bag. At another renaissance faire, I found the “perfect” replacement for my little bag.

My new waist bag had the added advantage of being hands-free. When I got my first cell phone, a tiny little thing that was about the size of a lighter, it fit nicely in the smaller outside pocket. My second cell phone, a slightly larger flip phone, also fit in that same pocket. Things were perfect.

But then I got more technology: a smart phone, a iPad. My perfect bag no longer worked so well. I needed to find something else.

Enter the Ristretto by Tom Bihn (my newest favorite bag maker). It had so many organizer pockets: a padded pocket for the iPad, two pockets that were perfect sizes for my little to-do notebook and my iPhone, a couple of pen pockets, a zippered pocket where I put my wallet, a main compartment which could hold a book or notebook, and a back pocket perfect for loose papers or a magazine. It also had several o-rings onto which I could tether my keys.

This new bag held much promise to become my Every Day Carry Bag. However, I soon discovered the main problem with this bag. Because it fit so many things, I tried to make it my one and only bag. But with everything that I wanted to carry at times, the bag became much too heavy. Even with its padded cross body strap, one shoulder was carrying more weight than was comfortable.

Maybe one bag will never be my perfect “Every Day Carry Bag”. My solution now is to have two bags.

I pulled out my absolute favorite backpack, my 40+ year old Jansport. They do NOT make backpacks like this any more. A piece of leather secures the straps in back. The buckles are metal – they will never break like plastic ones do. And Jansport, true to its lifetime guarantee, replaced my broken zipper for free about twelve years ago.

And I purchased a smaller bag, the Sidekick, from Tom Bihn.

My Jansport is a relatively small backpack. It will hold my laptop, a textbook, and a thin binder. So it never gets too terribly heavy. Carrying a backpack is easier on my shoulders than carrying a cross-body shoulder bag.

The Sidekick is a perfect small bag. It has lots of organization. An outer zipped pocket has my keys, tethered nicely by the o-rings and key-straps. Inside are more o-rings and multiple pockets. The interior o-rings tether my Tom Bihn wallet and other organizational pouches. This means I will never accidentally leave my wallet somewhere ever again. There are pockets for my phone, to-do notebook, a pen, a pencil, sunglasses, and more. I can nicely fit a paperback in the main compartment.

It doesn’t seem as if it were that long ago that I started hearing about bucket lists. People would ask me what was on my bucket list. I could not answer. There are always lots of things that I want to do. Did I have to choose? If I tried to enumerate every idea that came to my mind, I would have a list that no one could accomplish in a lifetime.

The notion of keeping a bucket list seems too inflexible to me. My hopes and aspirations are fluid. Circumstances change and I want to be able to change my dreams accordingly. So I think it is good to have dreams, but to hold them lightly.

Sometimes interests change. Back when I was in my early thirties, I bicycled with three friends as far as I could go in a week. Two of them were bicycling across the country. I had only a week’s worth of vacation time, so I went with them from Seattle, WA to Libby, MT. For a long time after that, I had the dream of one day bicycling across the country. That dream got modified – taking an entire summer off did not seem feasible – maybe I would bicycle across the country in stages, a week at a time. Pete even offered to be my sag support. When we moved to the midwest, the thought of driving out west to spend a week bicycling seemed like too much effort – too much driving, too much time away with both the driving and the bicycling. So I didn’t pursue the dream. For a while, a long while, I felt badly about abandoning that dream. Was I was just giving up? Was I not persistent enough? But, in fact, my interests had changed. Holding tightly to that dream brought about feelings of guilt and shame. I’m glad I realized that I’m in a different place now and I don’t have to be tied down to that dream.  I’m happy to just go bicycling along the roads and bicycle paths in Albuquerque.

I don’t want to hold on to a dream so tightly that I would be devastated if, for some reason, I could no longer pursue it. I have hobbies that give me a great deal of pleasure and that I’ve always thought I would continue doing for the rest of my life. I love to spin and knit and play the recorder. But my thumb joints are giving me problems. They ache when I overuse them in any kind of gripping motion.  Right now, I’m trying to figure out if there are modifications that I can do (hand position, equipment, materials) to alleviate the problems. I know that my thumbs are likely to continue to get worse. So I am also thinking of other activities that I can do that won’t put strain on my poor thumbs. I want to be able to transition (and plan that transition) from one dream to another. 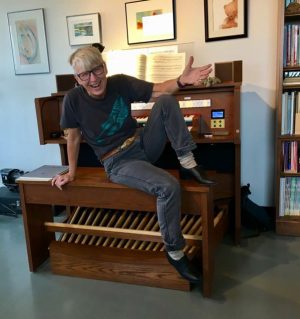 Sometimes, holding on to a dream too tightly blinds us to other possibilities. For many, many, years, I’ve held the dream of, one day, having a little residential–sized pipe organ. Such things do exist. I’ve played on little pipe organs in practice rooms at music schools and dreamed of having one of my own someday. Being a bit of an organ snob, I didn’t even consider anything other than a pipe organ. Then, a year ago, when I actually had the opportunity to buy a small pipe organ (albeit a bit bigger than I had envisioned), I started re-evaluating that dream. Though I now have tall enough ceilings that a small pipe organ would fit the space, I live in an apartment building now. I have neighbors who share walls, ceilings, floors. I realized that I wasn’t playing the piano very much because I did not want to disturb my neighbors, especially at odd times of the day or night. Only then did I start to think that a digital organ, with headphones, would be much more practical. Technology has improved a lot and I found a digital organ that I really liked. I had to let go of that dream of a pipe organ to fulfill my dream of just getting an organ of my very own. Holding on tightly to that dream of a pipe organ had not allowed me to think of any other possibilities that would have given me joy and fulfillment.

Do I still have dreams? Oh, yes. Pete and I think about going to France for a year. But that may morph into something else. Perhaps exploring all  the Amtrak routes, stopping off at places we’ve never been to and then hopping on the train again to go to the next place. Perhaps it will be buying a little camper van (an old VW would be perfect!) and traveling around the country for a year. France is still a dream – but one that I am holding on to lightly. And, in the meantime, we can go to Paris for a few days on a vacation.

I’m fortunate to have many interests. I’m fortunate that I get excited about the prospect of doing many different things. If accomplishing one of my dreams does not work out, there are a number of other dreams that can take its place.

So hold on to those dreams … but lightly.